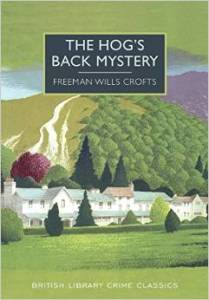 A feature of the cover design of the British Library’s Crime Classics series is the use of illustrations taken from old railway posters. This, no doubt, is tapping into a feeling of nostalgia for a bygone era when for most people travelling on holiday meant a train journey to the seaside.

Rob Davies of the British Library explained in his session at The Bodies From The Library conference in June that the adoption of this new retro look for their Crime Classics series saw a quantum leap in sales. With the series featuring John Bude novels such as The Cornish Coast Murder and The Lake District Murder, the connection between the locations and entertaining holiday reading was too good to miss so the 1920s and 1930s railway poster designs became an intrinsic part of the brand.

The evolution of such posters is intriguing in itself. Initially, when the railways first sought to encourage passenger travel they were torn between conflicting approaches – to load the posters with information about the destinations or to let the picture replace a thousand words and rely on strong images to attract attention. Gradually the latter approach prevailed with minimal text and often a strong “strapline”.  Who can forget “Skegness is so bracing”?

For a quick journey through the timeline of the evolution of railway posters go to: