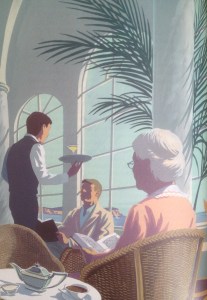 The above image, by Andrew Davidson in The Folio Society edition of The Body In The Library, for me epitomises the “cozy” in Agatha Christie – a palm court in a hotel with Miss Marple observing crucial developments. The resemblance in the illustration’s style to the railway posters of the 1920s and 1930s – a retro feel also exploited by The British Library Crime Classics series – is marked. So the reader is very clearly steered into the appropriate vintage feel and atmosphere.

The cast of characters in The Body In The Library includes the professional dancers who were a feature of such genteel hotels in resorts such as Torquay with which Agatha would be very familiar. Dorothy L. Sayers included a similar setting and captured too the slightly shabby truth behind the glamourous facade of the dancers’ lives in Have His Carcase.

Miss Marple is frequently viewed, by both readers of the books and by protagonists within the books, as an interfering old busy-body. Murderers, to their cost, have been known to dismiss her in such terms. Even her fellow gossips in St Mary Mead often snipe behind her back about her nosiness.

However, in this instance, contrary to such sniping, she is brought into the case by Mrs Bantry, the mistress of the house in which the body is discovered. Mrs Bantry recognises the insidious power of malicious gossip in a small village and understands all too well that there will be a presumption among their neighbours that her husband, in spite of all his protestations to the contrary, will be judged by them to have been carrying on with the young woman whose body turned up overnight in their library. She foresees that he will inevitably respond to the subsequent snubs he will suffer by withdrawing into his shell. This eventuality will ruin both their lives. Mrs Bantry therefore, trusting her husband’s statement that he has never seen the girl before in his life, brings in the only person she feels can get to the bottom of the mystery and save her husband, and her, from the fate she sees awaiting them. Miss Marple is, therefore, involved from the outset of the investigation, not as a nosy bystander but as a trusted friend.

Christie’s understanding of the dynamics of relationships in a small country village and the nasty undercurrents that swirl beneath the picture book exterior makes this apparently stereotypical “cozy”, in fact, anything but cozy. It is insightful and merciless in its exposure of the unpleasant truths about human nature that are normally hidden behind the genteel facade. Layers of this facade are peeled away to reveal the seamier reality beneath.

This ability to portray so accurately the English middle class of the inter-war years, both as they wish to appear and as they actually are – identifying their fine qualities and skewering their nastiness – is frequently overlooked in Christie. It is too easy for the modern reader to dismiss her depiction of this “cozy” world as a collection of lazy, stereotypes recycled endlessly in the service of fantastic plots. In fact, like so many stereotypes, they represented an all too recognisable collection of characters, many of whom would have been recognised by her contemporary readers as portraits, albeit at times perhaps caricatured, of people they actually knew. The modern reader who fails to appreciate this important point misses a vital aspect of Christie’s brilliance and relevance to the student of the social and cultural norms of that era.