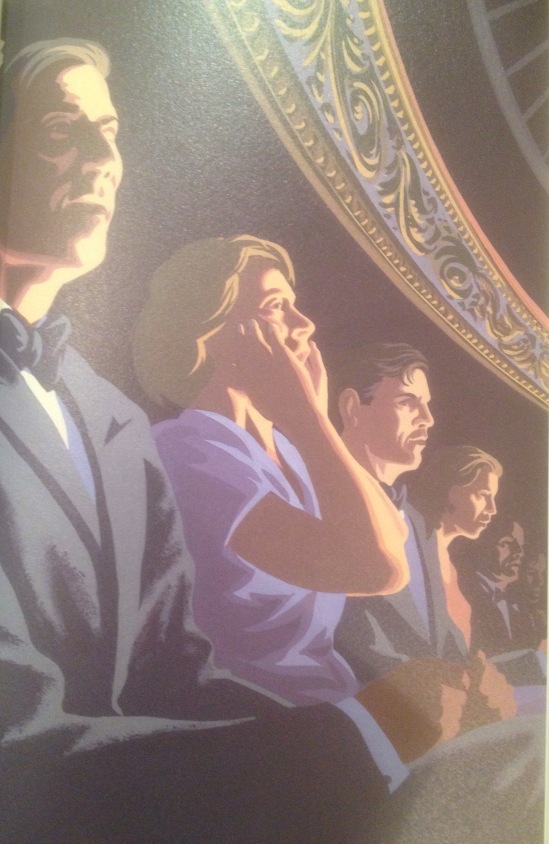 Illustration by Andrew Davidson, taken from the Folio Society edition of the novel.

It is often said that Agatha Christie’s novels lack characterisation or that she employs two-dimensional stock characters to populate her village settings. If a reader wants psychological depth then he or she should look elsewhere – perhaps to Anthony Berkeley or Dorothy L. Sayers amongst her contemporaries of the Golden Age.

Whatever the truth behind such generalisations, there is no doubt that Christie did employ great psychological insight in more than one of her novels. Let’s face it, if she didn’t and the plots were always psychologically implausible she’d have gone out of fashion years ago. One such example of her penetration into the workings of the mind is to be found in the “last” Miss Marple case, Sleeping Murder. I say “last” because although it was published in 1976, shortly after her death, it was actually written in 1940*. Indeed the book is set in the late 1930s, mentioning His Majesty’s Theatre and the princesses Elizabeth and Margaret Rose, and appears to pre-date the story of Nemesis since in that novel she has given up gardening on doctor’s orders but is evidently still an active gardener in the course of this novel.

It is in fact at His Majesty’s Theatre that a pivotal moment in the plot takes place. Gwenda, the young heroine of the book, is shocked by the lines from the play The Duchess of Malfi and recalls a traumatic incident from her childhood in which she saw a murdered woman with a person standing over the body speaking the self-same lines.

The plot revolves around this partial recollection from childhood and it is in describing this that Christie is so psychologically accurate. She notes that children are very peculiar in what they do and don’t remember from their childhood. These repressed memories of trauma became very much more widely known during the 1980s and 1990s when suppressed memories of childhood abuse were widely discussed in the context of trials of abusers based on the testimony of victims recalled many years after the event.

The reliability of such memories has been the subject of much debate in legal and medical circles. There is evidence to support the concern that such memories may be inaccurate, even false, being reconstructed by the people under conditions where they may be very suggestible. The process of trying to aid the recollection of repressed memories may in fact result in wholly artificial memories being created in the truth of which the person is wholly convinced.

Subsequent experiments have been conducted which replicate the conditions for recalling lost childhood memories and memories have been “recalled” based on the deliberate false stories included amongst true stories.

The way in which the memory works is still becoming understood with differences in short term memory and long term memory retention or loss being found to be quite different and occuring in different parts of the brain.

Christie’s novel is consistent with the current thinking on the operation of memory, quite ahead of academic thinking at the time, and so would appear to have been based on careful and close observation of the phenomenon – perhaps in her daughter Rosalind and other children she came across. In many ways, the empathy with the victim of the memory loss, Gwenda, is almost maternal and so the more understandable.

It is also possible that Christie drew on her own troubled psychological experiences when writing of the memory loss or repression. Her temporary disappearance in 1926 was marked by many of the hallmarks of a “fugue” episode under dissociative disorders. She was suffering stress through overwork and traumatised by the death of her mother and by the breakdown of her marriage to Archie Christie. She displayed classic symptons when she disappeared, travelling to unfamiliar surroundings, assuming a different name and identity (taking the surname of her husband’s new lover) and suffered from amnesia relating to the period of her disappearance. Certainly these events would have given her a personal understanding of the confusion and state of mind of a person under such circumstances. Maybe she was echoing her own personal experience when she had her character Gwenda cry out that she must surely be going mad.

*There is some debate about the actual date of writing. Christie indicated in her Autobiography that it was written during the blitz when she feared she might be killed in the bombing as she was living and working in London at the time. Correspondence between Christie and her literary agent also discusses the book in 1940 and she executed a deed transferring the anticipated publishing royalties to her husband Max that year, which would seem an odd thing to do if the book was not already written.  There is however evidence from her notebooks uncovered by John Curran that she was planning work on it as late as 1947 and 1948. Certainly the title was changed from the original. The first draft was called Murder in Retrospect but that had to be dropped when her US publishers used that title for the novel Five Little Pigs. The title was then changed to Cover Her Face, the line from the play The Duchess of Malfi which trigger Gwenda’s memories of the traumatic event from her childhood, but that too had to be changed when P. D. James used that title for her first novel.